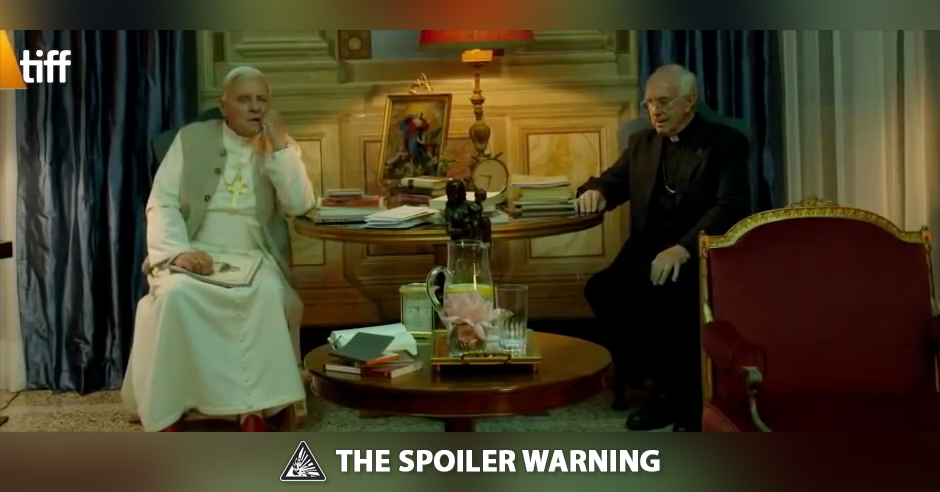 Synopsis: The soon-to-be-outgoing Pope Benedict (Anthony Hopkins) invites the soon-to-be-incoming Pope Francis (Jonathan Pryce) to his residence for a few days. Over a series of conversations — some harsh disagreements, some gentle reminiscences — the two ponder theology, personal failures, and the Church’s remaining place (if any) in the modern world.

My take: I mean this as both complement and critique: The Two Popes is exactly the sort of breezy, nonintrusive sort of movie that I’d want to watch on Netflix on a Saturday morning. Complement, because it has an easy, infectious charm to it — one owed almost entirely to Hopkins and Pryce, whose onscreen chemistry is so damn good it makes you forget that only one of them remotely resembles the person they’re playing. (Pryce is uncanny; Hopkins requires some heavy squinting on both our parts). The mood is light and the conversations delightful (then again, I could probably watch two hours of these actors talking about the weather). Critique, because they /aren’t/ talking about the weather: they’re talking about the Catholic Church, particularly regarding an era which was marked by scandal and transition. And on that subject, I can’t help but feel the film comes up short, talking around the truly heavy issues in favor of easy platitudes and a stunted sort of redemption. It gnaws at me, not because I need every movie to be Deadly Serious, but because movies about religion are rare as is, and the few we do get are typically awful and/or gimmicky. To see a perfectly good one one come along, armed with two terrific actors and an audience that expects nothing but in-depth conversation, feels like a prime opportunity to mine that subject for something more difficult, vulnerable. To give me more than hero worship for Francis (as if the Church were now magically devoid of scandal), or hand-wavey redemption for Benedict (as if, by leaving, he is nobly sharing in said magic) — to tease out their very real disagreements, and go for blood. I’m happy with the film on its own terms. Catch it on Netflix over your morning cup of coffee, and enjoy your brain being mildly tickled. I only wish it had aimed higher than that.

Pairs with: Calvary, My Dinner With Andre (I’m stretching here)