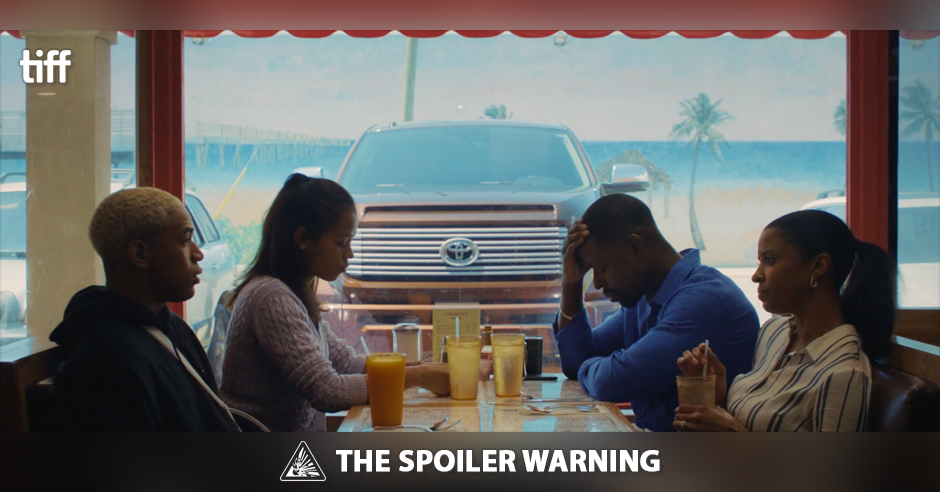 Synopsis: Tyler (Kevin Harrison Jr.) is a high school senior living in Florida. We follow a few months in his life, as well as his family’s (particularly his sister played by Taylor Russell, and father played by Sterling K. Brown), as they work through a few extremely difficult situations.

My take: Waves is a hard movie to criticize — hard because its heart is very clearly in the right place, and hard because my criticism hinges on specific plot details, the emotional impact of which would dampen if I spoiled them. I’ll start with the good stuff. Trey Edward Shults is clearly a gifted filmmaker. Having never seen Krisha or It Comes At Night, I can honestly say that I understand what draws critics to him. The way he and DP Drew Daniels move the camera is electrifying: somehow both claustrophobic and sweeping, peering into the hearts of their protagonists. They grapple with themes of cosmic significance: fear, forgiveness, the inheritance of anger, the catharsis of new love, the beautiful risk of being open. It’s no surprise that he got his start working with Terrence Malick. His aims, if not his execution, are clearly cut from the same cloth.

If there’s one thing that most clearly separates Shults and Malick, though, it’s maturity. Namely, the maturity to tackle the right subject, make it ring true, and cut out all else — to orient all that technically showy pretension toward one laser-sharp point. Waves, unfortunately, is the sort of film that tries to be about absolutely everything. Pick any Very Special Episode of a YA show out of a hat, and you’re likely to find it mirrored here, with all the nuance and levity of a child’s obituary. The problem isn’t that it’s dour; it’s that it goes so capital-B Big so often, it doesn’t give our hearts a chance to catch up. If Malick is obsessed with the enormity of what’s inside — that refracting chamber of whispered uncertainties that undergirds every human moment — Shults opts for an outside that is so huge, so dramatic, it drowns out the whisper. It’s the farthest thing from A Hidden Life. It’s a Life so underlined it could be identified from space.

So what’s the appropriate recipe for melodrama? What separates the Big Moments that work on me from the ones that make me feel used? I’m still struggling to piece that together. But I think a part of it has to do with the story being told. Does it feel personal, honest? Is it exorcizing something real? In the case of Waves, I simply don’t feel that vulnerability — however wonderfully its cast does to sell it (and Russell and Brown do particularly good work here). I hesitate to say that a white filmmaker shouldn’t be the one to tell this particular story, but I do think that’s a part of it. Watching Tyler make mistake after cliched mistake, I couldn’t help but feel a bit…gross. Like I wasn’t watching a real family going through real ups and downs, but some idealized white liberal projection of what terrible things might happen to That Sort of Family and what Solvable Social Issues rendered them inevitable. Like an exercise in empathy meant solely to reassure me — how hard this must have been, how heavy the burden, and how altruistic of me to walk a mile in their shoes! Take that with a grain of salt: I have no knowledge of how this film came to be, or how personal its storyline is. This is as likely my own issue as it is Shults’. But the baggage is strong with this one, and I could never quite shake it.

Which is a shame, because if I could step outside of that part of myself, I’d call this a rather beautiful film. The cinematography is breathtaking, particularly in its use of abstract color and light. Trent Reznor and Atticus Ross turn out a haunting score, per usual. The script, or at least the back half, knows when to take its time and breathe. It’s all there, and it’s all promising: there’s room for melodrama, for turbulent highs and lows, in our art. But turbulence, however beautiful, can’t move you without some emotional undercurrent to sustain it. This one never quite pulled me.

Pairs with: The Tree Of Life, Moonlight, Euphoria (I’m told?)