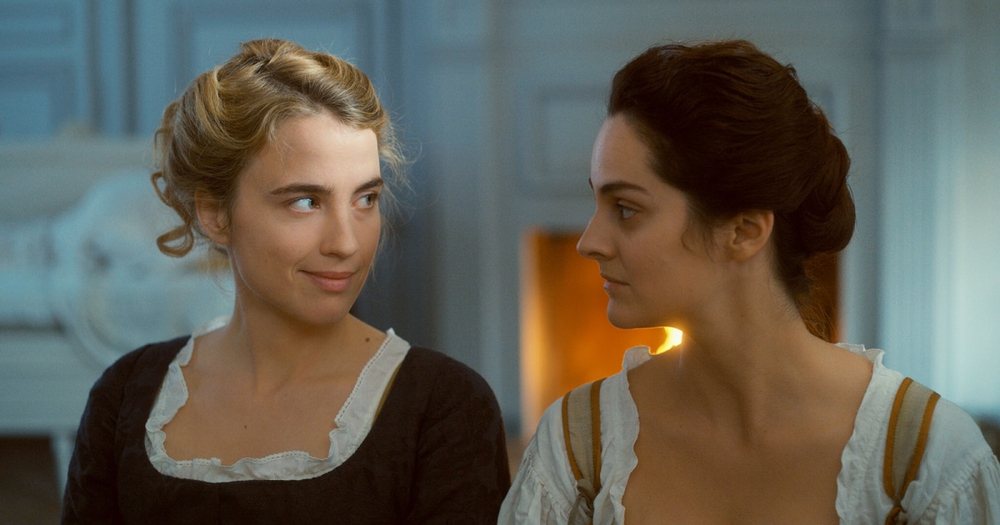 Blame this on a post-Dixie-Chicks-and-Freedom Fries definition of American elitism, or on years of chuckling at Seinfeld’s “Rochelle, Rochelle”: Whenever I try to write about Portrait of a Lady on Fire, Céline Sciamma’s gorgeous queer romance set in 18th century France, I feel like a snob. A sneering, head-up-his-ass “cinephile”. Like someone who hates blockbusters and has strong opinions about tannins. So rather than fight it, I might as well double down and open this review with a quote from Keats:

“Bold Lover, never, never canst thou kiss,
Though winning near the goal yet, do not grieve;
She cannot fade, though thou hast not thy bliss,
For ever wilt thou love, and she be fair!”

I’ve been thinking about that famous AP English selection for a few days now in relation to Sciamma’s film. Like Portrait, Keats’ ode is a work of art named after a different work of art, a static figure that evokes something about the ephemeral nature of beauty and truth, and how the two intertwine. An idyllic present jut up against a world that won’t allow it to persist. But where Keats is concerned with the past subjunctive—with the longing for, or hope of some fleeting eventuality—Sciamma resides in the future perfect. In the preemptive nostalgia for a thing that has not yet happened but is certain to vanish; in the memory that will remain after the fleeting has fled.

A slow-turning cheek, the arch of a neck line, the way anxious hands fidget and clench. Synecdochical beauty. Héloïse is the cloistered daughter of a French noblewomen; Marianne is a portrait artist, hired to render her image for a yet-unseen suitor. Because Héloïse refuses to pose for a painting, Marianne is forced to commit her to memory—to accompany her on long walks, pry open her shell, mine for her essential qualities. And so we watch her study her subject and, in turn, we watch her subject realize she’s being studied. Through their unspoken rally of furtive glances, we know they’ll eventually fall in love. But theirs isn’t the usual foreplay-to-climax formula of the tawdry romance, of an Act 1 tension that will release in Act 2. It’s melancholy, subdued, almost haunted by clarity. As if to fully see another would virtually necessitate love, a conclusion so foregone it already has one foot out the door.

There’s a conversation that happens in the middle of this film, involving the myth of Orpheus and Eurydice. The Greek poet had been given one simple instruction as he led his lover out of Hades: don’t look back at her or she will disappear. Chekov’s Pillar of Salt invariably applies. He does look back, she does disappear. What our leads are debating is…why? Why would Orpheus turn around, knowing full well the consequence? Are we really meant to believe that this “love” is so naive, so profoundly impatient, that it would literally destroy its subject for want of a glance? No, Marianne suggests, the “lover’s choice” would be to preserve her in reality, to resist that impulse and keep moving forward. By turning around, Orpheus makes instead the “poet’s choice”; he chooses the memory of a perfect ending over an uncertain future. Héloïse takes this a step further: maybe he didn’t choose her fate at all. Maybe Eurydice demanded it. “Turn around.”

It functions as a sort of thesis, of course: Marianne finding beauty in artistic preservation, Héloïse finding agency in controlling her image, in chosen immolation over unchosen contentment. The helpless observer and the willingly observed, both feeling the destructive pull of love. But I also think it describes something about the movie itself, about the way Sciamma has precisely engineered her story.

Rewatching Portrait of a Lady on Fire this week, what struck me most was how little of the above was explicitly on screen; how unconcerned Sciamma is with any overt sensuality. For some 70% of its runtime, there isn’t so much as a touch or a kiss! So why the disconnect? I think it’s because what Sciamma is really doing, is fashioning us a sort of preemptive memory. She’s teeing us up for the feeling of after-love, for the massive emotional space Héloïse will trace in Marianne’s rearview. How those fragmentary sketches will eventually start to snowball, long after their week is over and their lives have disconnected. How the fragments she’s given us will snowball, too, long after the curtain has closed and the festival is over and, for months, all there is left to go on is the distillation of memory, is the essence of the thing. Every detail, every “truth” lesser than beauty fades, and what’s left is only what it ultimately means — more intimate than Guadagnino, more potent than Kechiche. Love, in a Platonic sense. Or, at least, the heat love leaves behind.

At the time of its premiere, this was my favorite of the festival (to be eclipsed only by Parasite a few days later). And I only love it more on second viewing. Seek out this one in theatres if you can, and if it feels chilly at first, just give it room to breathe. Get out in front of it, keep your distance. In time, you might hear her calling you: “Turn around.”