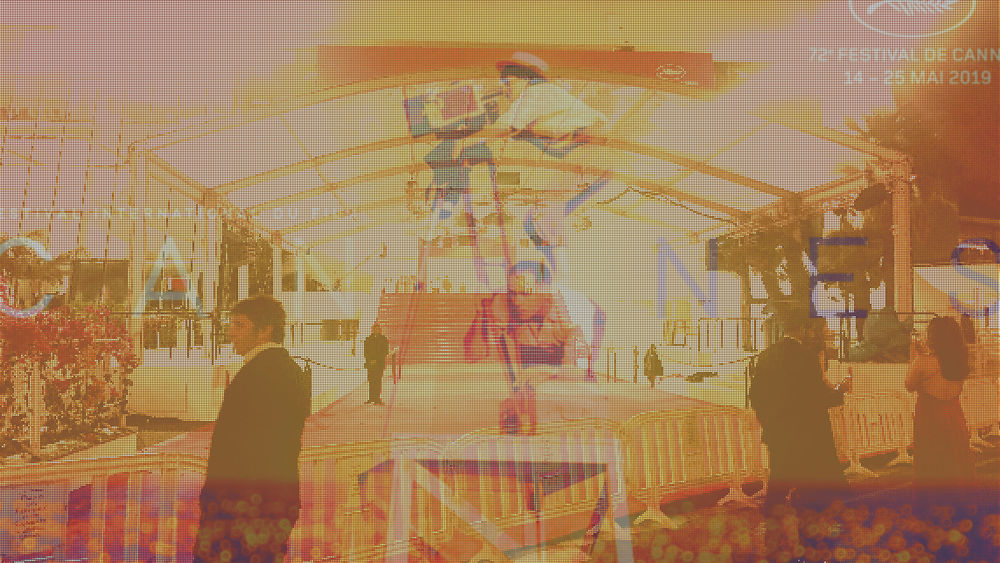 “Cannes is a festival of contradictions.”

I’ve tried to start this post a handful of times throughout the festival, and it’s always been with some variant of that sentence. Sometimes it was written from a place of bemused detachment, marveling at the juxtaposition of high and low, glitz and grime: the shimmering starlet and monkey-suited undergrad strutting side-by-side up the same red carpet for Malick and Mektoub, Rambo and Rocketman. If there’s any difference at all between the 4-hour arthouse and the 90-minute popcorn flick, neither the swarming paparazzi nor the slinky DJ set (a mashup of French baby-making ballads and Entourage-douchebag chic a la Hit The Road Jack) are tipping their hand.

Sometimes it was written from an uglier vantage point: the sleep-deprived 6:30am line for a film I barely wanted to see; the cramp-footed death march home after hours of begging, armed with a sign and a sunburn and the sweatiest Men’s Wearhouse tux this side of prom. There, the contradictions took on a more bitter hue. Cannes as the ultimate empty facade; a monument to nothing but its status as monument; a Mediterranean grove of Instagram fig leafs obscuring 2am Big Macs and 5am alarms, restless hours wasted in a sun-stewed daze, and a level of bureaucratic confusion that makes the DMV look like a concierge at the Ritz. How many nights of sleep had I lost due to some ambiguous disclaimer or seemingly-vindictive constraint? How much money, in opportunity cost and airfare and exorbitant AirBnB fees, was I throwing down the drain to watch movies in a setting infinitely less comfortable than the theatre 20 steps from my apartment? Here we are, the quote real cinephiles endquote, literally begging for scraps (and frequently failing) while a horde of zombified financiers twirl and giggle up the iconic stairs for a film they’ll never know the name of which they’ll leave halfway through — after a hearty conversation, a snap of the screen with the flash fucking on, and a round of leisurely e-mails on a phone whose brightness is somehow higher than max. Look at them all, dead-eyed and hollow, parading their excess for nothing and no one. Does that Czech supermodel with the $10,000 bag really harbor a passion for British socioeconomic drama? That rat-pack crew of bachelor party wannabes, they’re all big Jessica Hausner fans now?

And sometimes, of course, a wonderful thing would happen, leaving all that cynicism in the rearview mirror. In those moments, the contradiction was actually the festival’s secret source of joy; the velocity of a low becoming a high, the dark that makes sudden light all the more blinding. At 7:25 you’re empty-handed, begging on the corner; 7:26 you’re merci beaucoup-ing some generous stranger; 7:27 you’re sprinting up the red carpet, side-stepping Iñárritu on your way through security; 7:29 you’re standing in the packed Corbeille to cheer on Almodóvar, Banderas, and Penelope Cruz; 7:30 the lights dim and something calm, and assured, and beautiful begins. It doesn’t matter where you were, what you had to do to get there, how you felt like giving up 5 minutes prior. You’ve experienced what cinema does at its best: it fills you, transports you, creates emotion from scratch. And at Cannes, even on the most meager of badges, that emotional high is never far from reach. It’s a helluva drug, and it’s worth all the anguish…er, arguably. 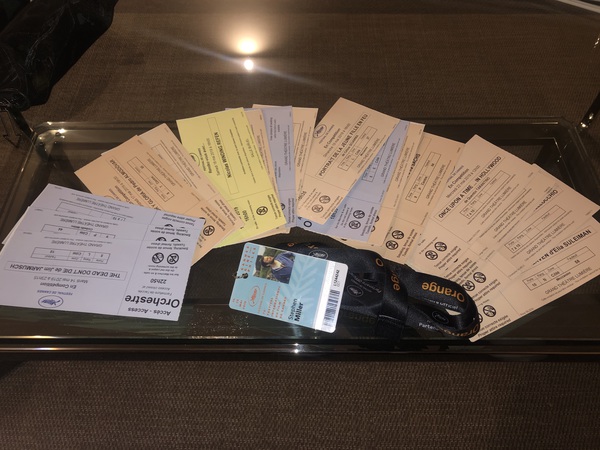 So here I am, on my flight out of Nice, wondering how I can possibly summarize these two frantic weeks in a legible form factor. I guess I can start with stats. Over the course of 12 (or 10, depending on how you count) days, I saw 27 things this year. That included all 21 films In Competition within 24 hours of their debut, 20 of which were at the Lumière, 14 of which were black tie premieres (“galas”). It also included 2 Out Of Competition premieres at the Lumière, 2 Un Certain Regard premieres at Debussy, 1 ACID premiere at Studio 13, 1 director rendezvous at Buñuel, and unfortunately 0 Lighthouses. 15 of these came from begging, 8 from last minute lines, 3 from the cinephile office and 1 from the town hall.1 On my “worst” three days I only saw a single film: once due to failed or poorly-communicated lines, twice due to Tarantino-mania. On my “best” day I caught 5 things: Mickey and the Bear (ACID) in the morning, a Nicolas Winding Refn talk in the afternoon, then back-to-back galas of Claude Lelouch’s The Best Years Of A Life (Out Of Competition), Corneliu Porumboiu’s The Whistlers (In Competition), and Gaspar Noe’s Lux Æterna (Out Of Competition, and batshit great.) At 55 minutes, Gaspar’s midnight screening was by far the shortest. At 3 and a half hours which felt like 8, Kechiche’s Mektoub, My Love: Intermezzo was by far the longest and, also, the worst. On one night I managed to sleep 8 full hours. For two days I managed to eat all 3 meals. Zero caffeine was ingested on this trip, which is a challenge I’m still not sure I needed to take.

Okay, now on to the good stuff: how should I talk about the films themselves? I’ve toyed with a few options. I could list everything I saw and rank them in some way. Or I could cherry-pick individual films which moved me and do long-form writeups. Or I could follow the precedent I set last year, and do day-by-day recaps which in turn break out into longer reviews. With time, I’m sure I’ll get a little bit of everything. But for now, I’ll settle on this: a chronological list of everything I attended, paired with extremely brief thoughts, and ending with a stack rank of all 21 In Competition films. All of this is off the cuff and likely to change; stay tuned for meatier reviews later.

The Films (and events) of Cannes

In total, there are 12 days of the festival. The first features only a single Opening Film; the middle 10 are standard festival fare (multiple premieres and rescreenings of the day prior); the last is devoted entirely to reprises and one out-of-competition Closing Film. To denote the track, I’ll use [CO] for Official Competition, [UCR] for Un Certain Regard, [OOC] for Out Of Competition, [ACID], and [MISC]. I’ll also use [P] and [R] to denote Premieres and Reprises respectively. Every CO and OOC film was seen at the Grand Lumière, except for Sibyl which was reprised in the Buñuel theatre. UCR was always Debussy, ACID was Studio 13, MISC was Buñuel. 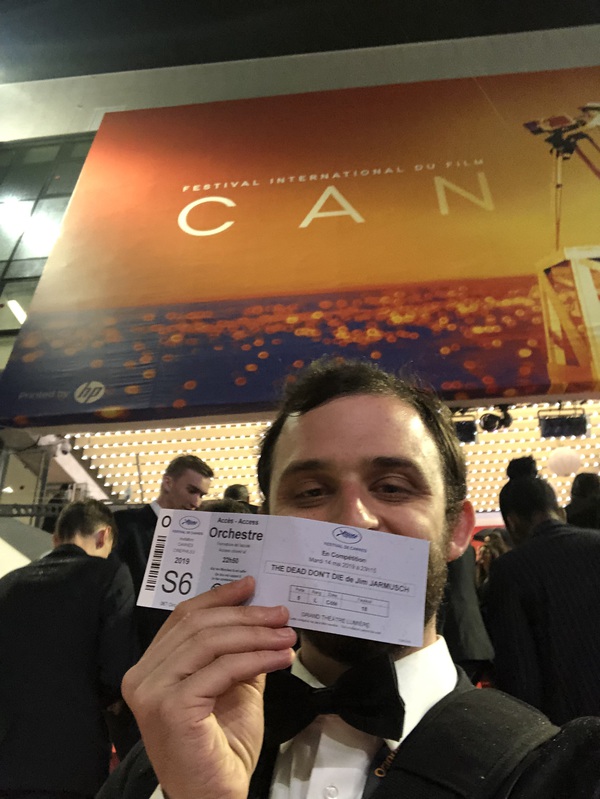 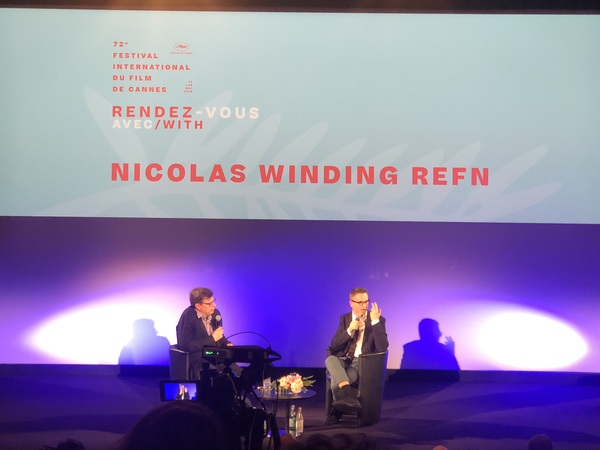 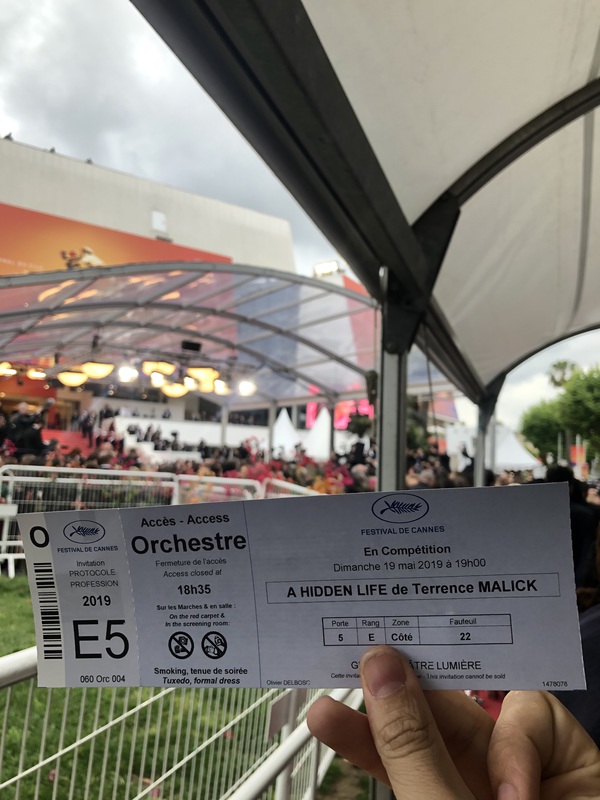 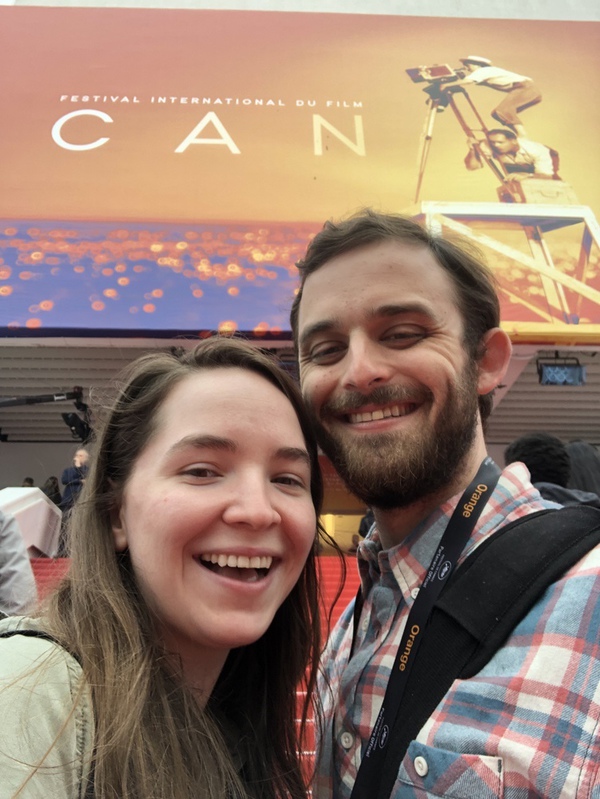 Phew! So there you have it. Everything I saw at Cannes. Now, as promised, I’ll give a quick ranking of the Competition films, which will almost certainly change by the time I wake up tomorrow:

2: Portrait of a Lady on Fire

5: Sorry We Missed You

7: Once Upon a Time in Hollywood

8: It Must Be Heaven

Cannes is a festival of contradictions, and I am no exception. Sitting here in my hotel in Tenerife (where I landed some 2/3rds of the way through this post), I’m unable to sift out the good from the bad. Stacking up moments of deep frustration against rapturous delights, the stressors of an opaque bureaucracy (I still recite names and showtimes when I try to fall asleep at night, like some obsessive-compulsive human Moviefone) against the delicate, the subtle, the empathetic, the profound. Maybe there’s no point in untangling it; maybe the 8am Ken Loach needed that 3am Big Mac just as surely as Malick needed my sweat-chilled suit. Mucinex and masterpieces, dolor y gloria. There’s something to be said for fighting for the things that you love, for love being wrapped up in the fight itself. I’m empty, and exhausted, and energized, and full. I never want to go to Cannes again. I’ll see you there next year.