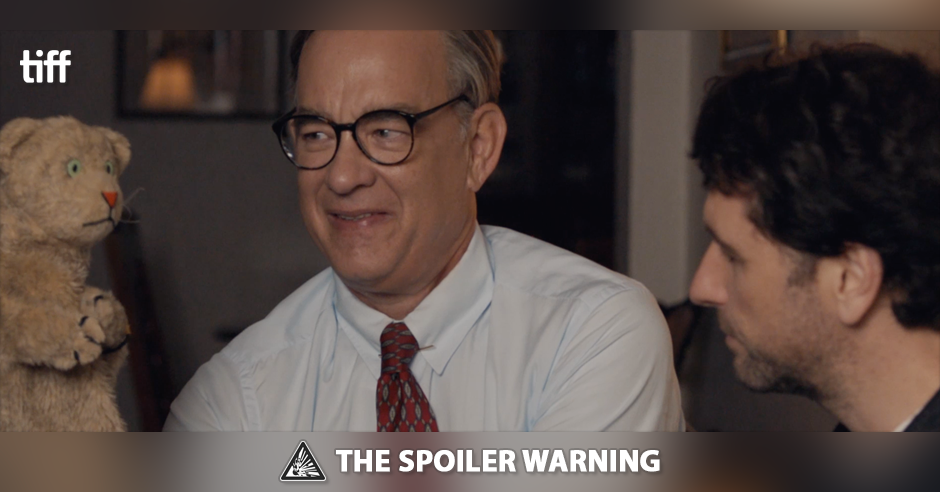 TIFF Update #11: A Beautiful Day in the Neighborhood

Synopsis: Crack investigative reporter Lloyd Vogel (Matthew Rhys) is tasked with writing, essentially, a puff piece — a profile on the heroism of Fred Rogers (Tom Hanks). Ever the cynic, Lloyd hopes to use his access to reveal some untold darkness beneath Rogers’ cheery persona. But over a series of face-to-face interviews, he finds that the exact opposite is happening: it’s his own life — particularly his relationship with his father (Chris Cooper) — that is being exposed.

My take: Am I calloused? Am I dead inside? Did the insane festival schedule strip me of my ability to feel? But if so, why did the openly melodramatic Blackbird bring me to tears in the same festival? How did Marriage Story manage to rip my heart out the night before?

I ask, because the critical consensus appears to be that A Beautiful Day in the Neighborhood is a lovely, charming, heart-on-its-sleeve ode to the cultural impact of Mister Rogers. Whereas the movie I watched felt like a clumsy, alien soap opera which included precisely one great performance and precisely zero emotions with a ring of truth.

I’ll start with the good: Tom Hanks. Hanks’ Rogers is everything you expected it would be, and whenever the camera is fixed on him, this movie works its magic. America’s Dad turned America’s Therapist; it’s a brilliant bit of casting, and Hanks probably earns his inevitable supporting Oscar nomination.

Note that I said “supporting”. Not wanting to veer into pure hagiography, the film (wisely, in principle!) relegates Rogers to the sidelines. The problem is, the story he’s sidelined for is godawful and flat. Rhys’ Lloyd, who is far and away the film’s lead, takes the world’s corniest script and somehow manages to undersell it: every emotional moment plays like the climax to a late-season Scrubs episode which accidentally muted the voiceover. Or like a deleted scene from Wish I Was Here. Or a direct-to-Netflix sequel to The Last Kiss. He is to Zach Braff what Newman-O’s are to Oreos, is what I’m saying. And he’s hardly propped up by the cast around him: Wendy Makkena is given virtually nothing to do as his wife, and even Chris Cooper, America’s unofficial Negligent Father to Hanks’ aforementioned Dad, feels like a parody of himself.

I don’t think I blame the actors; I think this is a clear directorial choice. I believe Marielle Heller wants this to feel as stagey and Public Access-y as the show she’s homaging. And while I can respect that on a purely intellectual level, I can’t help but feel the gambit didn’t pay off. Beyond the sets and puppets and simplified emotions, what makes Rogers so compelling is that he completely believes what he’s saying: there’s no wink, no cute-for-cutes’-sake indulgence in his craft. His was a show that would rather stay silent than speak something unnecessary or untrue. And Heller herself even acknowledges the power of that silence! So I find it odd that her film doesn’t give its uncanny emotions any room to breathe. Even the script’s emotional fulcrum — the one truly powerful character moment Rhys had a shot at convincing me of — is undercut by a silly, nested dream sequence. Rather than feeling real empathy, or sitting with the quietness, I was constantly wondering if we were about to wake up. This may well have been the point (I suspect that it was), but on a gut-emotional level I find it bewildering.

Tom Hanks is so good, it’d be a shame not to watch this. But I can’t recommend it in good faith either. Instead I’ll say this: watch Won’t You Be My Neighbor first and, after cleansing all the dust from your eyes, ask yourself how badly your soul needs even more Rogers. Because Hanks does deliver the goods, albeit in short supply. If you’re already filled, you’re probably better off quitting while you’re ahead. If you aren’t, proceed here with caution. Maybe I’m dead inside, and you’ll love Heller’s film like so many in my audience did. But if you’re left feeling angry and confused, know that you’re in good company. You can stomp if you want to, or play all the lowest keys on the piano at the same time — but you can’t say I didn’t warn you.

Pairs with: Won’t You Be My Neighbor, The End of the Tour

Episode link: TIFF 2019: A Beautiful Day in the Neighborhood