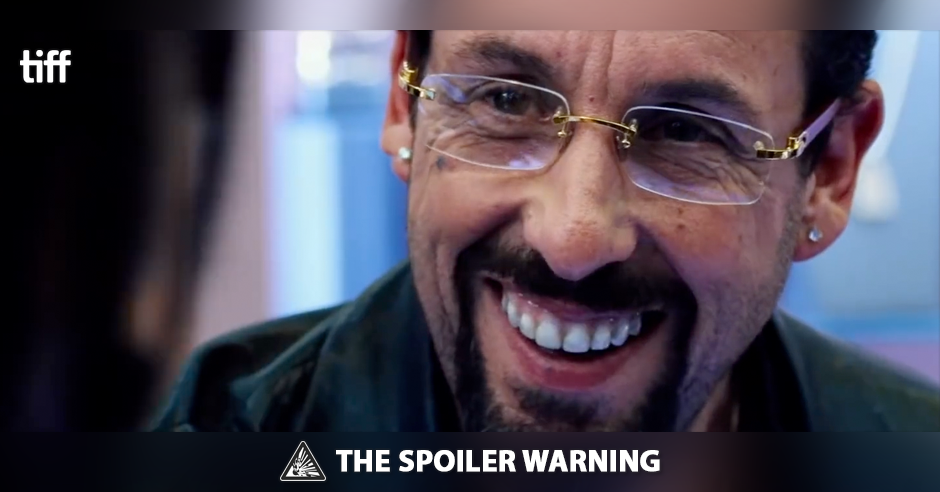 Synopsis: Howard (Adam Sandler) is a jewelry store owner in the Diamond District of Midtown Manhattan. Howard is also a raging gambling addict. Uncut Gems follows a few days of his life, as a series of bad moves gets him in deep with the mob, and he attempts square up his debts while fighting the impulse to chase his losses.

My take: In an early scouting expedition for Uncut Gems, directors Josh and Benny Safdie met a panhandling woman named Arielle Holmes who seemed like she had a story to tell. They paid her by the page to pen a memoir about her life, which would in turn be made into a screenplay. The result, 2014’s Heaven Knows What, was a synth-laden odyssey about two frequently homeless, narcotic-addicted lovers. They fight in public to the point of cruelty. They threaten suicide for the sake of argument, and nearly make good on it. Perhaps most crucially, they never even hint at sobriety: this is their world, and if you don’t like it you can leave. The protagonist “Harley” is played by Holmes.

One standout from that film was Buddy Duress, playing a drug dealer and fellow addict who gives Harley the closest thing she’s got to a source of support. That real-life acquaintance of Holmes would go on to collaborate with the Safdies on 2017’s Good Time, a riveting neon noir about a petty thief (Robert Pattinson) trying to rescue his brother from the notorious Rikers Island jail complex. Buddy’s co-starring turn was revelatory, attracting top talent like Judd Apatow — but he hasn’t been available to cash in on the goodwill. At this moment, he’s serving yet another stint in Rikers, on charges of drug-related larceny.

I write this preamble not just to bring up more excellent movies you should watch (that too, though), but to get at three important facts about the Safdie Brothers’ output. First, they are relentlessly, brutally committed to showing the world as is. Second, they pair that honesty with an in-your-face brand of romanticism — neon-soaked everything, soundtrack dialed past 11. Third, and perhaps most importantly: they don’t give a damn if you like the lead character or their decision-making process.

Uncut Gems might not be an easy pill for audiences to swallow. There’s almost nothing to like about Adam Sandler’s Howard, and the people in his orbit (LaKeith Stanfield’s grifting partner, Julia Fox’s enabling girlfriend) rarely fare better. Like Holmes in Heaven Knows What or Pattinson in Good Time (or Ronald Bronstein in Daddy Longlegs, while we’re keeping score), Howard is by far his own worst enemy: not just for the poor life choices that set the film in motion, but for choices made roughly every 20 minutes on his way to correcting them. Take any mob flick or episode of the Sopranos, and picture that one debt-addled stock character being shaken down for everything he owns. “What could that poor bastard have done to deserve this?” you might ask. Howard Ratner is the sort of bastard who unequivocally deserves this, but he never carries himself as “poor”. He’s proud. Defiant. Delighted, even.

Now picture you are that bastard, defiantly triumphant. Robbing Peter to pay Paul, wheeling and dealing even when you’ve got nothing to deal, shouting evergreen promises of “big one”s just around the corner — and picture genuinely believing it each and every time. The constant highs and lows. The thrill of the chase. The adrenaline rush of knowing that at any moment, you could soar into unimaginable greatness — or be thrown out your window into 47th St traffic. That’s the magic trick the Safdies pull off here. And it’s an exhilarating, manic ride.

I’m talking around the actual plot of movie, because I don’t want to spoil what makes it tick. But here’s what I will say. I don’t know anything about the Diamond District or its competing pawn shops and jewelry stores. I couldn’t tell you a single interesting fact about basketball, let alone transcribe the opaque lingo of those who place bets on it. But at one point in this movie, I found myself on the verge of a genuine panic attack: over a single penalty throw in a televised game, watched in a jewelry store lobby by people I mostly despised. It didn’t matter that I barely understood it, or that the guy I was rooting for had made every wrong turn en route. I felt it with all the fight-or-flight fury of an addict eyeing his next fix. This isn’t your standard-grade, walk-a-mile-in-their-shoes variety of empathy. This is the pure, uncut stuff: the ability to truly inhabit someone else, to feel their anxieties blot out the sun.

Sandler is extraordinary, and the Safdies are a treasure of guerrilla filmmaking. They’re the poet laureates of the indefatigable downtrodden, of the true Never Sleep-ers in a city that mostly pretends. Watch this movie. Let yourself be bewildered by it; lost in it; hypnotized by it; furious at it. Let yourself resent its hero from somewhere deep inside, until that moralizing part of you is all hollowed out. Peer into the walls of that freshly dug chasm, and wait for something brilliant to catch the light.

Pairs with: Heaven Knows What, The Gambler