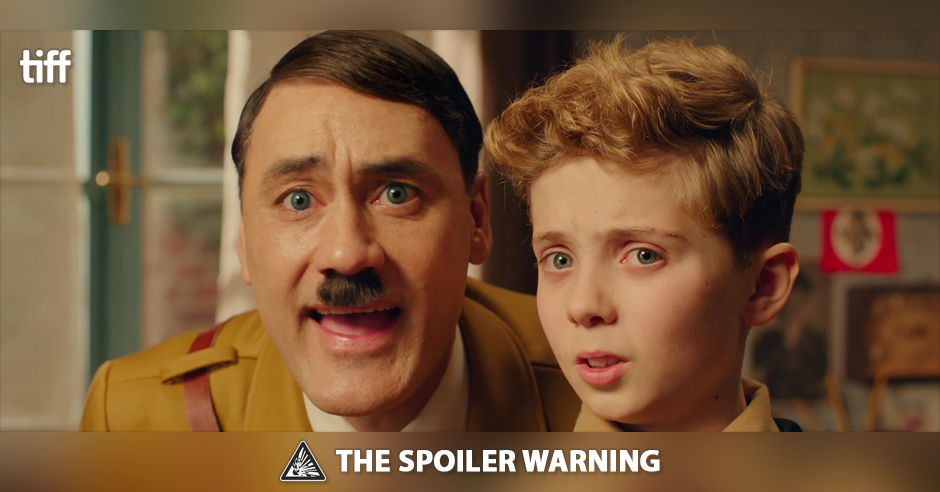 Synopsis: Jojo (Roman Griffin Davis) is a young Nazi-in-training, who spends his time conversing with two secret people in his life. One is his imaginary friend and role model, Adolf Hitler (Taika Waititi). The other is Elsa (Thomasin McKenzie), the very real Jewish girl hiding in his attic.

My take: Reviews out of TIFF have been surprisingly tepid for Jojo Rabbit. Some say it’s too schmaltzy, others say its satire is too light, and still others say it’s playing with fire. I say this is the exact combination of schmaltz, light, and fire I needed in the festival’s home stretch.

If the synopsis didn’t make it clear, Jojo Rabbit is an exceedingly silly, irreverent affair. It’s a satire built upon a simple premise: what if we take a completely average, bumbling set of characters, and transpose their behaviors to the key of Nazi Germany? 10-year-olds charge with rocket launchers like it’s rec time at summer camp; grown men “Heil-Hitler” each other with all the verve of a limp conference-room handshake. Jojo, our protagonist, is like any other kid playing make-believe in any other uplifting children’s movie — except his lava monsters are Jews and his action figure is Hitler. In one cutaway, Adolf eats a sparkly unicorn head for dinner. (That doesn’t fit with my premise, but he does and it’s great.)

This is not a brutal examination of fascism, nor is it a particularly deep dive into the radicalization of young men (I recommend Young Ahmed if you’re looking for the serious take). But I don’t think that lack of seriousness makes it toothless or twee, either. What it does, is reveals a version of satire that feels perfect for this age of Internet Irony: it undercuts its enemies rather than overtly reviling them. It posits that behind all the bigoted bluster, there’s a pack of stunted man-children playing follow-der-Führer — and knowingly destroying the world in the process. Jojo is, of course, a child. But so is everyone else in this movie: Sam Rockwell’s know-nothing sergeant, Stephen Merchant’s pompous inspector, Rebel Wilson’s go-get-em assistant. They’re all playing in the same idiotic sandbox, kicking up dirt with no regard for the other kids’ eyes. Waititi’s Hitler, for his part, could have fallen right out of a Mel Brooks musical: campy, zany, deluded to the core. As an extension of Jojo’s psyche, he’s forced to hold childish convictions. But surely the real one, in this parallel universe, is no less of a chump.

I can hear the response from a mile away: these people were /*more* than incompetent, and by reducing their ideology to a childish delusion, we’re ignoring the evil at its root — the evil that men latched, still latch, onto, across all competencies and intellects and degrees of phony accent. I completely agree, and can only imagine Waititi does as well: I think his fantasy of what the world could be is meant to be set alongside — not replace — our knowledge of what the world is. Far from being toothless, I see it as a defanging tool: not to excuse or explain the motives of wrongdoers, but to laugh at the image they’ve built of themselves. To say that people are capable of endless cruelty, but the excuses they give — the pseudo-philosophic structures they invent to justify their cruelty, comprising the big boy “ideologies” they only half-believe — that is always, always nonsense. Why not slap a mustache on it and tell it to dance?

I think laughter can still be the best medicine, and Jojo Rabbit is a total blast. The kids are great, the Nazis are ridiculous, and Johansson brings a playful energy the world needs more of. I’m delighted that, of all the things Waititi could have done to cash in on his Ragnorak credibility, he chose something so knowingly irreverent and so singularly his. This is one I’m excited to see again, in the most packed theatre I can find.

Pairs with: Young Ahmed, The Producers