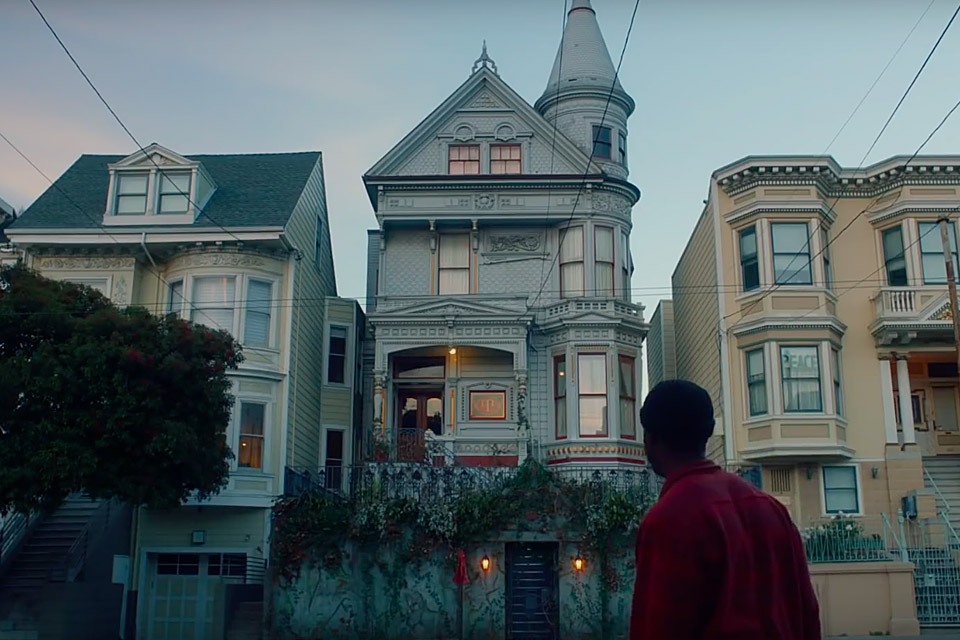 There’s something powerful about inaccessible places, where physical closeness magnifies an emotional remove. If I’m being honest, the travel memories I most romanticize are rarely anchored in connection. They’re buffered by language, by impermanence, by literal rain-smudged glass. Waiting dumbly at an outdoor restaurant in Istanbul for an unknown meal (büryan kebabı) at an unknown cadence (on the hour, every hour) for a price I’d learn by trial and error. “Far off the beaten path” in my memory, which is like a Turk calling Central Park “far off the beaten path” from Times Square. That jet-lagged sunset trudge through Shibuya, enshrined by a generation of Lost In Translation viewers, which remains totally impervious to irony: when I’m lost in a sea of scuttling strangers, all my learned self-awareness adds up to zilch. A church trip to San Francisco at 15 years old, overwhelmed by the sheer density of the Mission: Mariachi bands next to megaphoned preachers; pupusarias and dive bars and Chinese donut shops, all cut by alleys hiding murals more vibrant than anything I’d seen in art class. It was like high and low, metropolis and back-yard-BBQ had all slammed together. “If I ever get the chance,” I thought, “I’m going to move to this city.”

I did move to that city, along with many thousands like me. Bored of suburbs that had been tailored specifically to us, we were drawn to the different, the vital, the “real.” To anything, in short, that wasn’t already ours. You know the rest of the story. We entered in droves, causing prices to skyrocket, and displaced the very people who had made the city unique. So the irony of me, a white techie transplant, watching a film called “The Last Black Man In San Francisco” in a hundred-year-old cinema that’s been retrofit to serve $12 milkshakes and truffle fries…it’s palpable. Gentrification is a painful, complex subject, and I have no moral high ground to claim. I can’t watch this through the eyes of the displaced, and it’d be cheap and co-opting to try.1 But film, when it’s good—and this one is really, really good—can serve as a bridge between otherwise inaccessible worlds. And while director Joe Talbot and star/co-creator Jimmie Fails have some brutal truths to speak about gentrification, what strikes me most is the beauty they exude in the telling. I opened this review with the nostalgia of travel, because I can’t help but see a damning contrast between the feelings they’re wrestling with and the ones I’ve put on a pedestal: not my surface-level high of seeing the unfamiliar at a pleasant remove, but the bone-deep ache of seeing something familiar, something really truly yours, fade out of reach. And finding a melancholy respite in the sorrow. 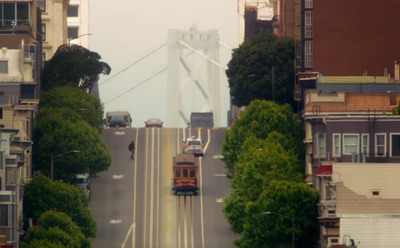 “You don’t get to hate it unless you love it.” With those words, uttered to a whining commuter on the SFMTA, Jimmie voices the closest thing The Last Black Man In San Francisco has to a thesis. It’s not that he doesn’t feel anger, of course. There are plenty of things that demand it: his childhood eviction from the neighborhood of his youth (Fillmore), the criminal neglect of the neighborhood of his present (a radioactive Hunters Point), acts of arson fueled by predatory landlords, acts of murder fueled by antagonistic police. And if you only read the synopsis and the “Sundance hit” byline, you’d probably expect the film to mostly live in those spaces. I know I did. I was prepared for a courtroom drama about squatters’ rights; a man torn from his birthright who insists on taking it back, on righting society’s inexcusable wrongs. Righteous outrage at infuriating concepts. But it’s hard to hate an abstract concept; almost as hard as it is to love it. The intensity of feeling that this film operates in can only be specific. It’s the specificity of Jimmie’s love that gives weight to his loss.

Perhaps most striking is the film’s precise sense of place. It’s become cliché to call a work of art “a love letter to” its setting, but Adam Newport-Berra’s cinematography makes that phrase virtually unavoidable. This is one of the most lush, meticulously composed depictions of anything that I’ve seen in recent memory.2 Love infuses every frame. Much like Paterson, it’s a surreal depiction of a very real city that manages to be both heightened and intimate, meditative and grand. We’re encouraged to take our time, to soak up every idiosyncratic detail. It’s about the tenderness with which you turn a city into a home, painting over its blemishes and burrowing into its minutia: not blue but periwinkle, not The City (certainly not “San Fran”) but Golden Gate Ave just before Steiner where the main thoroughfare gives way to a row of tree-lined Victorians. So many settings are burned in my brain. The cliffs south of Potrero that shear off from blinding green to greyish brown, sunlight strobing through telephone poles as the bus snakes around the bend. A particular building just above a Tenderloin parking lot with a wide facade containing just a single column of windows. An overcast late afternoon on California street, as the fog rolls in and the headlights start to flicker and Jimmie’s tiny, distant skateboard emerges from the peak and zig-zags cautiously down.

A city is more than the sum of its postcards. It’s the people who make up its essence. Take Jimmie’s bestfriend Montgomery Allen. Tweed blazer, blue slacks, sandals with socks: a playwrite of eternal curiosity, always in on some cosmic joke, who seems to be floating a few feet above the rest. Or Kofi, the inscrutable neighbor and childhood friend. Talking shit in the company of his Greek Chorus posse; warmhearted and proud of you when caught one-on-one. Grandpa Allen, nestled in his tiny couch in his tiny living room watching televised movies from the 40’s. It doesn’t matter that he’s functionally blind: Mont will whisper-narrate the important bits (“Is she pretty?” “I would say so”), and he’ll beam like he’s seeing it for the very first time. The suit-and-tie street preacher, perched on literal soapbox, pouring his soul out to an audience of none. The busker on Mason singing “San Francisco (Flowers In Your Hair),” his euphonious voice negating a lifetime of halfassed pity. Absorbing it all is Jimmie himself. A mostly silent, unfazed observer, he glides through the city with such frictionless ease you’d think he were a part of the scenery. Whether rolling listlessly down a city slope or screaming in a vacant house just because he can, he’s blessed with an almost childlike contentment. Always wearing the same uniform of beanie and red flannel; all he really wants is for things to stay the same.

Still, despite our hero’s best intentions, the world is changing. And the film makes no bones about where its sympathies lie. In one painfully relatable scene, Jimmie is sitting at a bus stop somewhere near Union Square when a nudist walks by. Slowly, as if it were the most casual thing in the world, he unveils a courtesy cloth, sets it on the neighboring seat with a maître d’ flick, and plops down. In a hackier satire, that would be the whole of it: Jimmie the audience and nudist the foil, setup and waaacky punchline. But here, they’re both part of the setup. The bitter punchline comes in the form of a decked out cable car filled with partying techies (fresh from Moscone if the lanyards are any clue), hooting and hollering at the hilarity of a naked man. And not just laughing, but shouting the exact “Silicon Valley” reference that cohort would use, trying to be in-crowd when actually being obtuse. This is the “other” that is isolating our hero: not the quirky characters who lend the city its color, but the posturing invaders who consume it whole-cloth. Having driven him out of his own home, they don’t even have the decency to understand it. At least not beyond a few cheap signifiers. Here the specificity is pointed, and personally indicting. I’ve been that tourist giggling at the naked man; I’ve unironically used that very quote. When Jimmie and Mont meet a skeevy real-estate broker, the alma mater he name-drops is no accident. Neither is the neon sign shining through his office window: the entrance to the same pricey theatre I was presently seated in, a 30 second walk from my apartment.

Which isn’t to imply that this is a meanspirited caricature, either. What it is, is an honest and precise expression of grief. While the film is more than happy to highlight societal evils, I don’t think it’s primarily about the things that it hates: not the yuppie couple who bought Jimmie’s home as a status symbol, or the polite-but-suspect neighbor who comes to his play, or even Thora Birch’s punked out hacker giving her privileged rant on the bus. They are called out, to be sure, but they aren’t the addressees of this lovehate letter. Like Blindspotting and its conflicting feelings about Oakland, The Last Black Man In San Francisco is less concerned with fixing society’s failures than it is with analyzing Jimmie and his chosen response: his quiet acceptance of a collective sin he can’t control. His wistful blend of love and hate and even a tinge of bemusement, as he realizes that the home he’s fighting for might no longer exist. Might never have existed, at least not in the pure sense he’d hoped; that this cycle might repeat itself like the slow-rolling fog.

“Do you love it?” It’s easy to be nostalgic for far-flung places, but whatever that feeling is, I don’t think it’s love. At best it’s a fleeting infatuation. Genuine love doesn’t require motion blur, or jet-lag, or incomprehension: it doesn’t depend on a lack of familiarity. It luxuriates in familiarity, in the everyday routine. It’s patient, intentional, with nowhere in the world it’d rather be. Jimmie loves his city, even as it betrays him. Joe loves his city, even when it disgusts him. And here I am, a direct beneficiary of all that betrayal. I’d be lying if I said I’ve fully unpacked what that means, let alone how to conscientiously move forward.3 Have I recognized the beauty around me with an ounce of the passion I give some half-shrouded skyline on the other side of the world? Or am I forever the consumer, gawking at the “novel” and “real”—of the city I live in, of art that condemns me—from my garish party bus? The Last Black Man In San Francisco accomplishes what the best art can: it holds a mirror to society, and gnaws at something true.

This letter may not be addressed to me. But with its careful eye and soulful construction, it demands an emotional response. Chris and I discuss it on Episode 560 of The Spoiler Warning podcast.