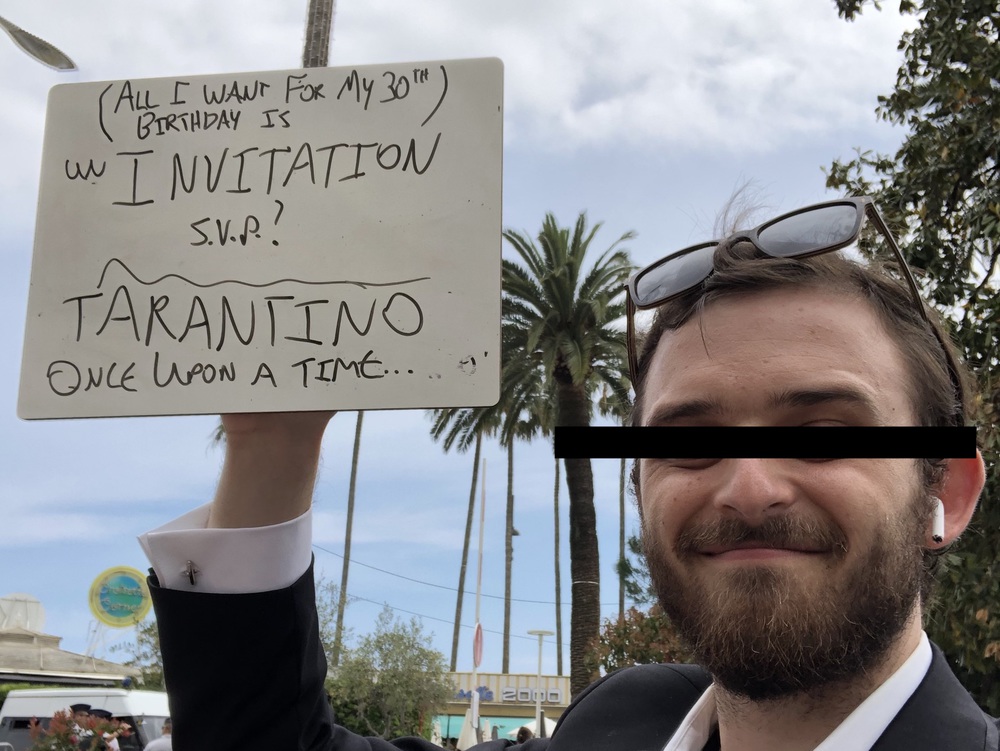 If there was one day that fully encompassed the highs and lows of Cannes, it was May 21. Once Upon A Time In Hollywood was premiering late that afternoon, and Tarantino-mania was in full swing. Movie star sightings had begun around breakfast; the paparazzi that typically waited till 4pm were out in hordes by lunch. Large sons of media execs, armed with sternum-buttoned tux shirts and dangled D&G shades and baby blue tickets and women paid not to hate them, galavanted from hotel bar to hotel bar in preparation for The Hottest Movie Event Of The Year, Brah. Sometimes, in their galavanting, they’d make accidental eye-contact with me. It’d take a second to process it all — the Cinephile badge, sun-broiled suit, sign with “(All I Want For My 30th Birthday Is) UN INVITATION S.V.P! TARANTINO — Once Upon A Time…” scrawled in dry-erase marker. But eventually they’d get it. I wanted one of those blue things, didn’t I (flashing one suggestively). Ha. How much? Thousand euro? Two? Didn’t think so.

Not that my groveling was particularly noble, either. Even if you fudged the birthday (May 23rd) and accepted me as some Quentin acolyte (I’m not), what gave me the right to expect this over the thousands of other clamorers who took to the streets? The invite-only model is a terrible system, and it doesn’t lend itself to rational thought. Yet when a young woman planted next to me and nabbed one of those blue tickets 30 minutes before showtime, I felt a very real resentment towards her — for breaking my winning streak, for taking what I was owed. Much like the middle-aged cinephiles I’d been passing all week (who left most red carpets empty-handed) probably resented my ageist “luck” and faux starving-20something routine, perfunctory congrats notwithstanding. And so, after hating a few dozen people for no good reason, I went back to my corner to do what I always did: erase and replace with the same phoned-in urgency, this time for the second red carpet premiere of the evening. “INVITATION S.V.P! GISAENGCHUNG (PARASITE).” 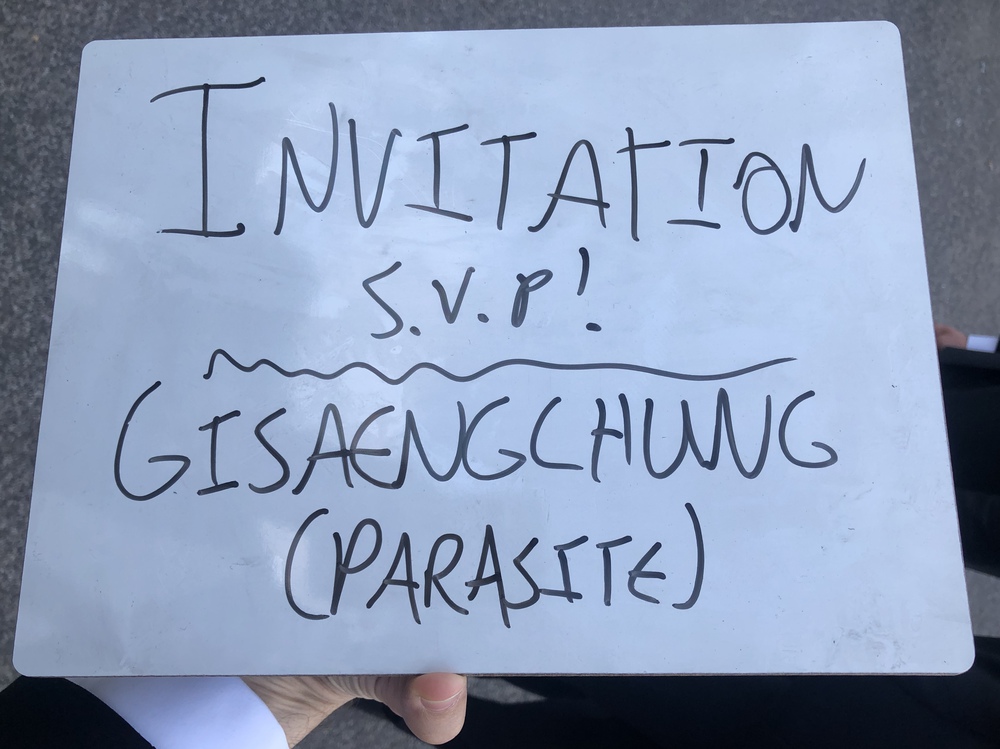 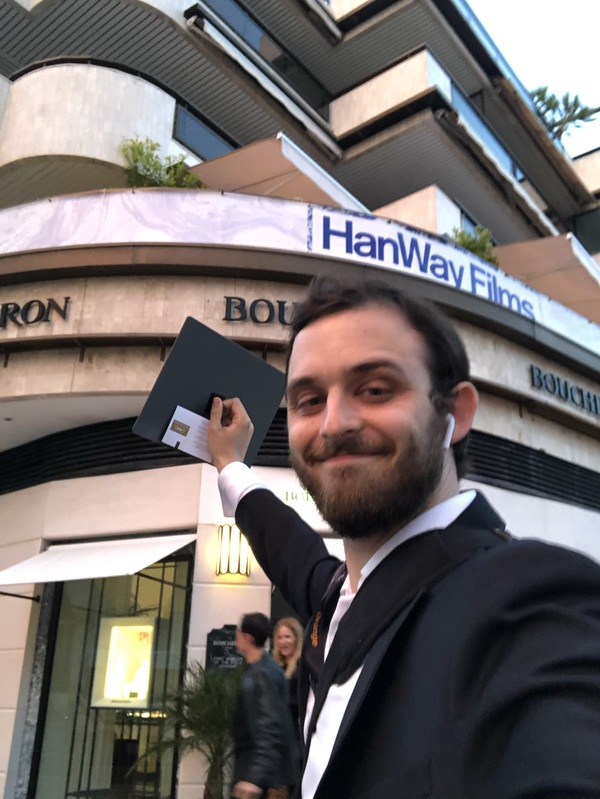 I’ve been telling everyone to avoid trailers for Parasite. This is why: I have a fundamental lack of imagination. I can’t conceive of a viewing experience different from my own. Because when I scrawled that message, I knew precisely two things about the screening I was begging for. I knew it was directed by Bong Joon-Ho, and I knew it was called “Parasite.” No synopsis. No genre. Not even whether a single person had liked or disliked it. It’s a unique aspect of the festival experience, that ability to walk into a theatre knowing virtually nothing. In the case of Parasite, I assumed I was in for a straightforward monster movie — potentially a direct sequel to The Host, given the name. I hadn’t assumed I was about to be handed a ticket to my favorite film of the fest.

Most films I love, I can attribute to a single craft: the gorgeous cinematography, the lush score, the harrowing emotional tether, the standout performance. With Parasite, I’m pretty sure that craft is structural engineering. Bong has designed a complex arrangement of genres and counter-genres which push and pull in ways that don’t make sense — horror, black comedy, socioeconomic drama, even a whiff of Sci Fi, all working in impossible concert. It’s lowbrow and arthouse, slow-ish and pulsing, riotously silly and deadly serious. It’s the filmic equivalent of a game of Jenga: a gravity-defying tower of narrative threads, designed to hold sturdy until the exact moment the conductor shouts “Topple!” Gathering my thoughts during the standing ovation, I had no clue how to articulate what I’d just seen or why it was so damn special. What I felt was pure whiplash, having been jerked around from scene to unpredictable scene by a director in control of a tonal arc only he could anticipate. I wanted everyone to feel that same dizziness: to go in blind and leave gobsmacked.

Revisiting Bong’s masterpiece in a post-trailer world, I can safely say I was wrong. I’d underestimated the extent of his magic. It turns out that Jenga tower has yet another impossible quality: it is seemingly immune to overhype. You can know there will be genre-bending twists, come in paradoxically expecting to see something unexpected, and still have it work. The construction — that grand orchestral swell of disparate parts coming together — it speaks for itself. This is why scenes from the trailer (which I maintain reveals too much) still manage to elicit shock and awe. Why even on second-viewing, knowing every single trick Bong had up his sleeve, I still felt my heart racing with something like uncertainty. I knew everything that would happen, but the how of it all? That has nothing to do with a synopsis. It’s guttural. Visceral.

If the “how” is what propels the movie, the “why” is what lodges it in memory for weeks on end. Because if you peek behind those dazzling mechanics, you’ll find the single best treatment of class politics this year — and 2019 has been chock full of them. Parasite somehow manages to be more heart-rending than a treacly biopic, more damning than any revenge fantasy, more empathetic than Ken Loach, more unnerving than Us, more brutal than Joker. With crowd-pleasing flare and palpable anger, Bong exposes the ugly underbelly of capitalism in a way that transcends language and place. He’s fixated less on systems than on people, here: how the “have-nots” are forced to feel morally dirty, compromised, while the “haves” are afforded the luxury of naivety. The cyclical tragedy of it all, as those trapped in the lower end of the system strain to appease, impress, become tenuous allies with those above — only to learn that the ladder they’re climbing is just a different name for the same cage.

In a sense, my original prediction wasn’t far off: spiritually speaking, this is very much a sequel to The Host. Or maybe it’s The Host turned inside-out. If the former was a literal monster movie about the insatiable greed of capitalism — all teeth and no soul, a creature that feeds on the poor of the city until there’s nothing left but bone — Parasite is a literal story about capitalism with the abstract schema of a monster movie. It’s about what living in the shadow of that beast does to people, whether above or below. The way they’re forced to orient their lives around it and its fragile sense of dignity, claw at each other to maintain some tiny bit of real-estate out of fangs’ reach. The way it turns scapegoat against scapegoat, victim against victim, in a futile race to a nonexistent top. By attaching ourselves to this monstrous inequity, this hellish train, this house built on suffering, this insatiable host — we all start to embody the ugliness at the system’s root. You are what you symbiote.

There’s really nothing I can say about Parasite that hasn’t already been said. It’s brilliant, urgent, and bone-deep storytelling; and it doesn’t resemble any Palme d’Or winner in recent memory (which is very much a good thing). See it blind or have it spoiled — it’s gonna work its magic either way. I had a blast discussing it in last week’s episode of The Spoiler Warning: 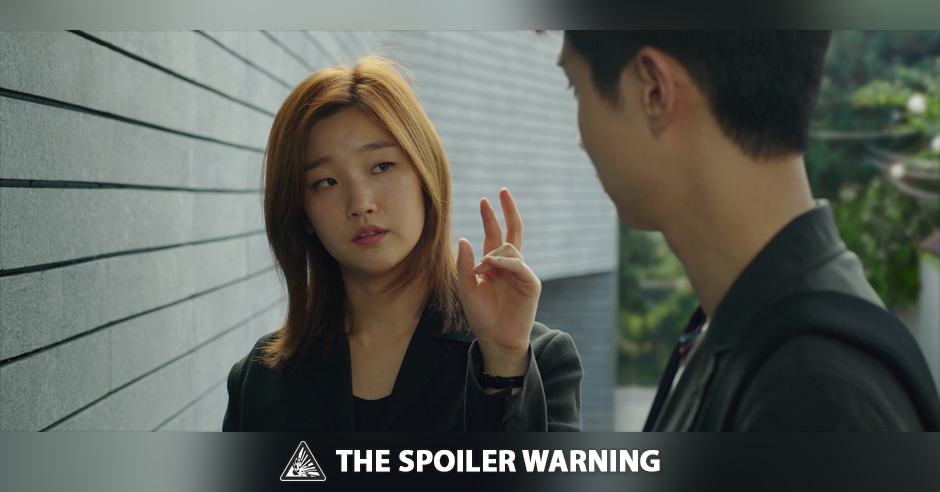