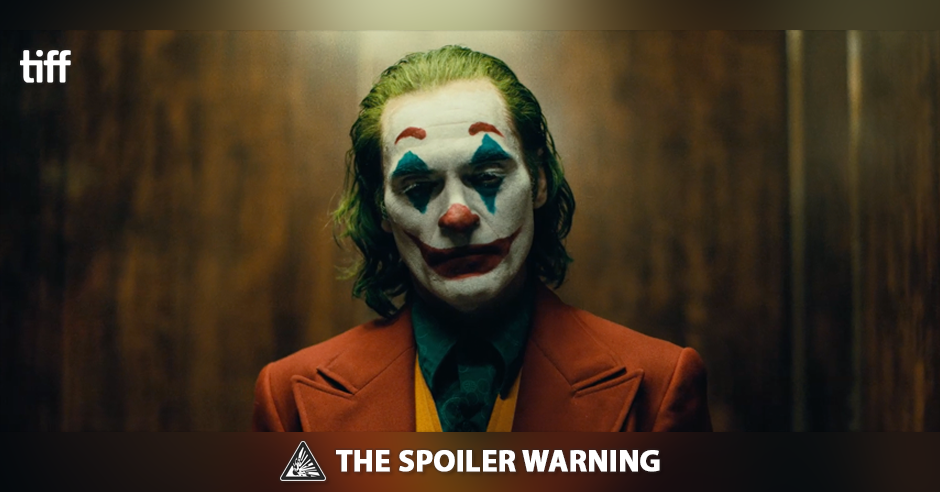 [NOTE: No spoilers are in this written review. The linked episode has designated spoiler-free and spoiler sections, the former of which is totally safe to listen to.]

Synopsis: Arthur Fleck (Joaquin Phoenix) is a clown-for-hire by day and aspiring comic by night, living with his elderly mother in a poor neighborhood of 1980’s-ish Gotham. We watch as financial hardship, tragedy, and increasingly volatile internal demons, catapult Fleck out of obscurity and into villainous infamy.

My take: In The King Of Comedy, Robert De Niro plays Rupert Pupkin, an aspiring comedian who dreams of — obsesses over — finding his big break on the late night circuit. That obsession ultimately tumbles into a violent resolve; a fixation that destroys any obstacle in its path. But the true tragedy of the character is revealed before all that, in an early scene where we simply watch him watching television. In his mind’s eye he is sitting in the audience and invited to the stage, where he shares an easy rapport with Jerry Lewis and company: dishing out witty zingers and charming mugs like the Consummate Professional he knows himself to be deep down. In real life, he is alone in his basement, laughing at nothing, while his mother begs him to turn the volume down. What was charming in context becomes terrifying in isolation: an alien play-acting, or miming, social ease, magnifying cheer to its hyperbolic extreme. That laugh, that smile — there’s nothing behind it. Which is to say, there could be anything behind it.

I am certainly not the first person to compare Todd Phillips’ Joker to Scorsese’s film — everything from the casting of De Niro to a few third act twists scream that Phillips is in on the joke. But his homage, while loving, is meant for a different era, to serve a different purpose. If Pupkin is a portrait of delusional obsession, Fleck is a portrait of soul-crushing hopelessness; if Pupkin holds a mirror to the fame-craving 80’s, Fleck holds a mirror to the contentment-craving Now. He doesn’t necessarily believe himself to be great; he doesn’t necessarily believe anything at all. Before he mutates into Ledger’s self-appointed agent of chaos, he is an unwilling agent of irony: cursed with a pathological laugh and a Pagliacci grin, forced to mime a joy he has never truly felt. “In my whole life, I didn’t know I even existed” he laments, and the Gotham he lives in echoes the sentiment to an almost on-the-nose degree. A grimy, thinly-veiled Manhattan where the Haves live in decadence and the Have Not’s struggle to tread water, their city is on the verge of economic collapse. People want a voice, want to be on that stage. Even if, when they get there, they have nothing to say.

Joker is very much a movie of our time. And love it or hate it, you can’t deny the craft at work. Phillips’ recreation of Taxi Driver’s NYC is meticulous, gorgeous, captivating. Look no further than the trailer to see what I mean: the dreary, grainy greige of not-quite-Times-Square, punctuated by a spinning splash of yellow that reads “Everything Must Go” and a dancing clown who’s…off…in a way you can’t quite describe. Whether it’s an “imitation” or “the real thing” is as pointless as diagnosing Fleck’s uncanny smile: it’s in your face, and extremely effective. This is hypnotic, delirious filmmaking, and the sort rarely found in a big budget spectacle. Much of that comes down to the clown at the center: Joaquin Phoenix, giving a performance as manic and vital as anything in his career (though The Master might be the closest approximation). There’s a coiled physicality, a violent spontaneity, to him: the way he tenses his shoulders, arches his back, laughs like some deranged puppeteer is moving his mouth against his will and straining his vocal cords to a leathery chafe. One scene, where he dances in grimy public restroom, is among the most haunting of any franchise film, ever. His Oscar nomination seems virtually inevitable, and it will be as well deserved as his predecessor’s.

The discourse surrounding Joker has been nearly deafening. On one side, critics ponder whether the film is prescient or “dangerous”, leading to conflicted statements like “It feels like an imitation of a very good movie by someone who doesn’t quite grasp why it’s good.” On the other, DC fanboys foam at the mouth to defend a movie they’ve never seen based on some nonsensical Deep State conspiracy (“critics are vapid corporate shills; how much is Disney paying you to mildly criticize this while you praise Avengers…and trash The Lion King and Aladdin and Solo…”), more or less proving the critics’ point. I’m somewhere in between. I think this is a very good (especially grading on the comic book curve) movie about a social malaise that is nothing if not timely, and if by showcasing something vile it risks glorifying it, it’s in solid company — from Taxi Driver to Natural Born Killers to, hell, Nolan’s Dark Knight, there’s no shortage of works whose cautionary messages are at odds with their mesmeric thrills. The difference, I suspect, comes down to goodwill and trust: Scorsese has earned an assumption of good faith that the director of The Hangover, for valid reasons, hasn’t. Hence all the agonizing about what “looks great” vs “is great”. It’s art about emptiness; it’s supposed to feel empty. “Everything is permissible, but not everything is beneficial.” Is there a benefit to making Joker now?

I think yes…mostly. I think if we want our mass market movies to have artistic merit, we can’t also ask filmmakers to treat their audience with kid gloves. I also think there is no sentiment reflected here that a troubled individual hasn’t already considered, and that those who make art are rarely rewarded for underestimating those who consume it. That articulating a very real sort of hopelessness is at least as likely to serve as an outlet as a catalyst. But I also don’t feel with the same organ that I think, and if I’m being honest, I felt a real tinge of fear watching Fleck’s French Revolution blaze in my packed Toronto screening — echoes of Aurora, justified or no, will forever haunt this franchise for me. So should we throw a blanket over that terror and hope to extinguish it, or let it burn so bright on screen — alongside the real caution, real sadness, real message that is there for those who are paying attention — that the emptiness loses its spark, its terrible ironic propulsion? Even if I wish the film had devoted a bit more time to sane responses alongside the delirium, what I think, deep down, is the latter. What I feel, is conflict. And if nothing else, I’m glad for a blockbuster that can provoke that tug of war.

Pairs with: The King of Comedy, Taxi Driver, American Psycho

[11/09/19] P.S. I recently contributed a condensed version of these thoughts to an article for QualityComix: The Evolution of the Joker