“In all, it was to take my father’s generation just twenty-three months to create these artificial borders and the equally artificial nations contained within them…And it is, as I often reflect, a grim fact of my own life that my career as a journalist— first in Ireland, then in the Middle East and the Balkans— has been entirely spent in reporting the burning of these frontiers, the collapse of the statelets that my father’s war allowed us to create, and the killing of their peoples.” 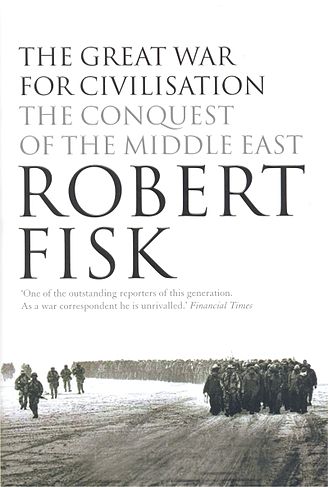 Where do I begin with a book like this? At just over 1100 pages — 60 hours according to my optimistic Kindle — it’s a sprawling, unfocused behemoth. It’s messy, opinionated, depressing, exhausting, and frequently in need of an editor. It’s also fantastic.

My primary reason for reading about the Middle East was to know the bare minimum: who is who, where did they come from, why are they fighting, and how do they relate with us? Wikipedia, in principle, might have sufficed. But if 8th grade history class has taught me anything, it’s that bullet points are only helpful in hindsight; names, dates, and nations will invariably blur together till the moment you make them personal. In writing this book, Robert Fisk is attempting to do the impossible: to describe 30 years of history in the (broader) “Middle East”, and to make each bullet point personal. In one novel we learn about the Soviet invasion of Afghanistan, the Islamic Revolution in Iran, the Iran/Iraq war, the Gulf War, the Algerian civil war, the first and second Intifada, September 11, the war in Afghanistan, Operation Iraqi Freedom, and the growing unrest which continues today throughout the Levant. Not in passing, but in beautifully written, emotive detail.

The trick? It’s all in the first person. As foreign correspondent for The Times then The Independent, Fisk has seen more than one would think possible. He’s stood on the front lines of all aforementioned wars, borne witness to air raids and suicide bombings, snuck past Russian troops in the backseat of shabby taxis, climbed into charred tanks and bunkers (including Saddam’s), and nearly been killed on multiple occasions — including being stoned by a mob in post-9-11 Afghanistan. The book begins with a face-to-face interview with Bin Laden in 1996, jumps back to unrest in Soviet-occupied Kabul at the turn of the 1980’s, and ends on the streets of U.S.-occupied Baghdad.

You can tell this was culled from decades of reports; the prose is carefully written and consistently breathtaking. It’s also deeply opinionated. But to criticize Fisk for a lack of objectivity is, I think, to entirely miss the point. Too often, “objectivity” is a euphemism for detachment, and detachment is anything but unbiased. Detachment always favors the status quo, the thing that says “everything is going fine” and sweeps moral quandaries under the rug of “necessity”. He wants to force us into an uncomfortable place, to understand how it feels to be on the receiving end of all of this chaos, and what might actually breed hatred for the West beyond a vague haze of “hating freedom.” And you don’t get that with bullet points.

Fisk’s reporting has been demonized as anti-American, anti-Semitic, pro-Saddam, pro-Osama, pro-terrorist propaganda. Hell, it’s probably been called pro-Putin and pro-Assad too, depending on what year it is. Needless to say, I wouldn’t be giving this 5 stars if I thought any of that were true. What it is, is deeply, compellingly humanitarian. It’s a howl of outrage against anyone, anywhere, that either needlessly kills or uses strategic diction to diminish the sadness of killing. And with the world already in unison about one subset of outrages (brutal dictatorships, sadistic killings in the name of religion), blaming Fisk for emphasizing a less-heard subset is a bit like waving an #AllLivesMatter sign in Ferguson. He repeatedly acknowledges that both sides have suffered, that many people we overthrew committed crimes against humanity, that nothing “excuses” bloodshed. But, at the same time, that it’s possible to understand motive without condoning the action.

“Is there, I ask myself, a key to all this, some incident, some lone truth that will illuminate all that we have done to the Middle East, the anger we have created, the terror we have inflicted upon those we now regard as our enemies? Is there some way in which to communicate this without reiterating the demands of the self-righteous, some way in which the death of innocence can be portrayed outside the framework of hatred? Osama bin Laden does not have to be the voice of those who have suffered. He has no monopoly over their grief and pain. He was never appointed their representative on earth.”

On its surface, the layout of the book may seem scattered. In the two years between the Iran/Iraq war and the Gulf War, for instance, we take a ~400 page detour to discuss his father’s World War I service, the Armenian Genocide, the Algerian Civil War, and the Israel/Palestine conflict. Emotionally, however, it makes perfect sense. The overarching theme of the book is the recurrence of history: war, oppression, bloody revolution. Iran/Iraq echoing the trenches of World War I, Saddam’s wrath against the Shiites and Kurds echoing the Armenian Genocide, post-liberation Iraq echoing post-FLN Algeria, our invasion of Afghanistan echoing the Soviets’, and on and on. When fascism was the fear, we supported the Soviets. When the Soviets were the fear, we supported Saddam against Iran, and Osama’s Sunni guerrillas against Socialist-controlled Afghanistan. When “terror” was the fear we supported scattered militia against Saddam’s Ba’athist and the Taliban’s Sunni “governments”. Now bloody anarchy is the overwhelming fear, and who’s left to support? Who haven’t we both battled and armed?

Again, I don’t think Fisk has all the answers. If I have any real criticism of this book, it’s that he sometimes trades his beautiful emotional equivalences (the tragedy of all suffering) for explicit, literal ones (“X is a thug, there is no difference between Y and Z”) — which makes the lack of a positive foreign policy solution more pronounced. Though there are clearly a few takeaways (don’t ever invade Iraq or Afghanistan, don’t support oppressive dictators, don’t strong-arm the UN), I have no idea what I would do if I were in power, inheriting this terrible history. But the one convicting principle, and the reason to read this book, is that at the very least we should be transparent about our messy ethical dilemmas — no, let’s call them sins. We should acknowledge the anger at the root of violence, condemn evil even when it comes from our “allies” — not cry from the rooftops about ISIS crucifying and beheading people, then turn a blind eye when Saudi Arabia has it as a part of its legal system — and be open about the terrible trade-offs our tangled allegiances have provoked. We shouldn’t hide behind words like “collateral” as a buffer from human suffering. We should actually stand for freedom and justice, for all its terrifying unpredictability. We should feel the weight of our history whenever we turn on the news, and above all, we should mourn with those who mourn.

“Soldier and civilian, they died in their tens of thousands because death had been concocted for them, morality hitched like a halter round the warhorse so that we could talk about ‘target-rich environments’ and ‘collateral damage’ — that most infantile of attempts to shake off the crime of killing — and report the victory parades, the tearing down of statues and the importance of peace.“

This has been a messy review, full of cherry-picked history lessons and likely one-sided takeaways. I’m sure as I start reading the likes of Thomas Friedman and Noam Chomsky, I’ll hear different outrages emphasized, and maybe with enough competing biases I’ll settle on something constructive. But I’m glad that for once I didn’t need to glance at Wikipedia to write this, and won’t when I’m reading other “objective”, historical accounts. I actually remember these names, dates, and nations, because Fisk made it personal.